The two smartphone operating systems that continue with a great battle among them are Android and iOS. Still, the number of Android users is more than iOS users. The main reason behind this is that the Android operating system is used by different smartphone maker companies but iOS can only be used by Apple itself. Anyways, today I’m going to discuss sharing files between Android and iOS. So, is that happened anytime when you needed to make a transfer between an Android phone and an iOS device? I will tell you the 3 easiest ways to transfer files between Android and iOS.

If you’re thinking to transfer files between Android and iOS using Bluetooth, it is impossible to connect both devices via Bluetooth because of Apple’s own restrictions. But, don’t worry, there are plenty of ways to transfer your data or files between these two different mobile operating systems, and here I’ve some effective tips to do so.

How to Transfer Files Between Android & iOS 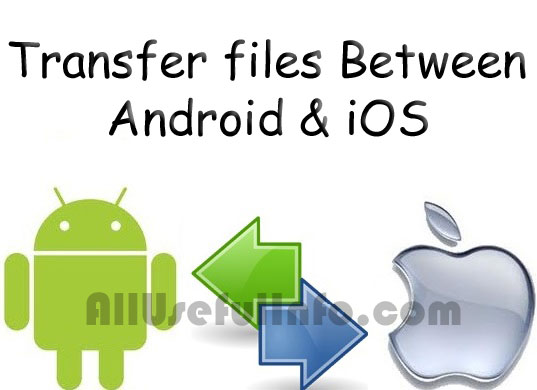 Transferring files between two devices manually using a data cable is one of the easiest tasks. Have you connected your Android phone with your Windows PC anytime for taking some photos or media files? I hope it would be a usual task for you.

So, if you want to transfer files between Android and iOS devices, this method will be suitable for you. In my case, I always connect both Android and iOS devices with the PC through different data cables simultaneously and drag and drop the photos, songs, etc from one device to another. Isn’t it a very easy task guys!

But, in the case of manually transferring files between Android and iOS, I always prefer the first drag and drop method in which both devices are connected at the same time to transfer the selected files easily.

In case you don’t have any USB cable to connect your smartphone to the computer, you won’t be able to use the above method. But still, I’ve another way that can help you in that condition. In fact, there are numerous file sharing apps available on the web to transfer files between Android and iOS wirelessly.

Here’s a few of them that may be useful for you:

Zapya is one of my favorite apps to transfer files between Android, iOS, and Windows PC and even you don’t need to have a WiFi or mobile data connection. 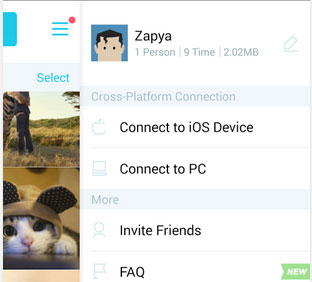 Zapya can transfer photo, music, video, and other file types from one device to another device without the aid of mobile network nor Wi-Fi routers. The content is duplicated directly from phone to phone at 128 times Bluetooth speed!

It’s another free file sharing app for many platforms such as Android and iOS. It makes sharing files very easier because you don’t need to register for an InShare account, there is no file type limits and more features that make file sharing easier. InShare also works without an Internet connection, in fact, you don’t need to be connected with the Internet to transfer files. It also guarantees your security that files are transferred only between your devices, without making copies somewhere in the cloud.

Also, keep in mind, if you want to transfer files between two devices, it is mandatory to have your selected app on both devices for a successful transfer.

Now, the third and most sophisticated method to transfer files is a could-based transfer. For an instance, you’re at kilometers of distance than iPhone and wanna transfer some data from your Android device, then there are several cloud-based application available to help you.

Everybody has an email account. For example, you have a Gmail account, you can transfer the file to your friend ID by attaching the file to Gmail. Isn’t it very easy?

As we know that some emails have a size limit problem and don’t allow to send bigger files via email. So, in this condition, Dropbox will be the best choice to transfer your file from one device to another. For this just upload your file to your Dropbox account and download that to another device by logging into the Dropbox account with the same credentials.

If the person to whom you’re sending the file is very reliable, it will be the best method to send files using Dropbox when both devices are at a very long distance.

Despite this, if both of the devices are in your hand, it will be a great idea to transfer files using the first method, i.e, by manually connecting both Android and iOS devices to PC via USB cable.

Mostly the people who don’t wanna install any file sharing app, the first method of transferring files between Android and iOS will be perfect for them.