[Published on: Sep 26, 2014] iOS 8 is the biggest iOS release ever both for developers and everyone else. In my previous articles, I have mentioned about the 10 new and attractive features of iPhone 6 but in my today’s article, I am going to mention such 5 iOS 8 features that are not available For Indian iPhone 6 Users. Consequently, if you are Indian and planning to buy iPhone 6 then you should read this article before buying it.

As you know that iPhone 6 has been launched in the global market with the most recent iOS 8 operating system with many interesting and unique features. Many features such as local recharge, third party keyboard support and many more has been listed in the update of the device Apple iOS 8. Before these features were basically available in Android smartphone. 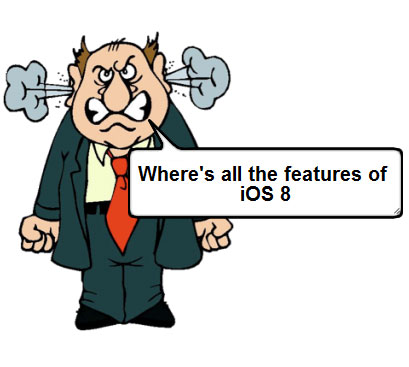 Rather there are some features, which are currently not available in India. Among these, I am going to list 5 iOS 8 features that are not available for Indian Users of iPhone 6.

In iOS 8 update Wi-Fi calling has been introduced. Through this, users can execute Wi-Fi calling instead of cellular network. This means you can even make call through iPad. The only reason behind the non-availability of this feature in India is carrier support, which is currently not available in India.

Beside this, T-Mobile is offering voice over Wi-Fi in USA. There by Verizon and AT&T are expecting to establish this service soon.

This is also a part of the iOS 8 update. Apple allows voice dictation using it’s own keyboard. However, the feature is not available for Indian language. For the reason that, at present there is no dictation, that supports Indian languages.

iTunes Radio is streaming service of Apple, that has again failed to make its way to India in another iOS update.

The next feature says “Hey Siri” when the phone is charging because the iOS 8 update allows you to trigger Siri. It also identifies which song is playing around you. However there are many other features including restaurant reviews, voice directions, local search, Twitter and sports integration that are still not available for Indian users.

Apple’s Maps app provides the facility of satellite maps in India. Direction support, display navigation, 3D view of buildings, local search, and traffic information are yet waiting to come to most Apple iPhone outside the US, which includes India.

No dought, still Google map is the most popular navigation app in India and is considered more accurate than Apple Maps.