Google Adsense is the most popular advertising program for bloggers around the world for making money online and most of bloggers are making hundreds of dollars per day through Adsense. But there are many factors that affect your Adsense revenue.

I know the content is most important factor for deriving traffic and earning money but what if you’re getting a good traffic and still unable to earn the desired money! I think in that case you would be getting a lower CTR. The lower CTR means lower ad clicks and fewer clicks means the lower revenue.

So, CTR is very important factor for better Adsense revenue from your blog but you should know that how much CTR is recommended for Adsense publishers. According to many experts, your Adsense CTR should be between 2 to 3 percent and some says up to 5% is fine but not more than it because if you get CTR more than 5%, Google may consider it as unusual behavior and have an eye on your account and your Adsense account may be blocked forever.

Well, this article is the reflection of my self experience in which I increased my Adsense CTR from something 1.5% to 4.2% by testing lots of experiments with my Adsense account and finally I’m going to share the 5 ways that helped me to increase my Adsense CTR.

Before telling you about these methods for increasing your Adsense CTR, I would like to clear a few more facts about CTR in your mind.

It can be calculated as following:

For example, if an ad banner is delivered 100 times (100 impressions) and receives one click, then the click-through rate for the advertisement would be 1%.

Here’s How I Increased My Adsense CTR Using 5 Ways 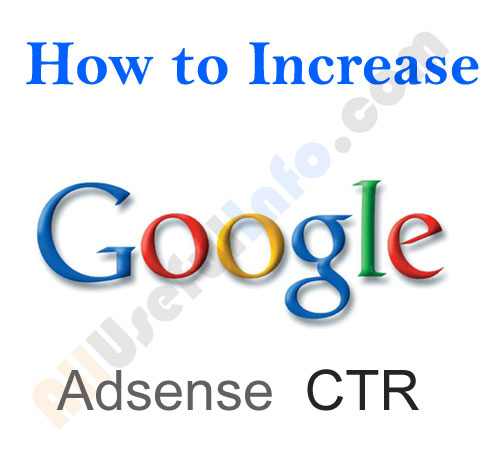 However, there are lots of experiments I did but a few of them get succeed. So, here I’m going to tell you the methods to successfully increase your Adsense CTR. Most of these methods are very popular and suggested by several bloggers worldwide but you won’t believe that one of these 5 methods worked for me as panacea for increasing the CTR and I’m sure that you will be surprised to know about it.

The method I called panacea is really amazing and quick way for increasing the CTR. I mentioned it at last (at 5th position).

However, it’s not that important because in most cases the performance of ads depends on your own content not the placement. This is because I experienced this fact myself. I often change the position of ads on my site but there becomes very negotiable change in CTR. But, this case may not be for all. So, here I’m going to tell you some most appropriate positions (I tested them all) for placing Adsense ads for getting higher CTR.

Here’s why I called the above method not much important because if you keep your ads placed at a location without making changes for long time, then the viewers on your site may be ad blind. It means, they will start ignoring ads at a point of view. So, it is also suggested by most of the experts that you should keep changing the position and sizes of your ads and it is the best way to avoid the ad blindness.

3. Be Careful About Ad Sizes

Yes, it is also very important factor to increase your Adsense CTR because it is necessary to have appropriate ad sizes that fits the layout of your website. However, bigger ad sizes attracts the viewer’s attention and good for high CTR but it’s not the case of everyone because you should be careful about your website layout and according to layout select the ad size.

If any of your ad size becomes odd, it may affect the overall look of your blog and users can also leave your blog. Moreover, I suggest you to use the ad sizes that are recommended by Adsense itself while you create a new ad unit.

I mean to say if your website has quality content (well written with more than 350 words) on each page, then only you should show the maximum number of ad units permitted by Adsense otherwise only show one or two ad units that performs better and reduce the low performing ad units from your page. Also make sure that Adsense doesn’t allow more than 3 ad units per page.

Generally, when you create a responsive ad unit and add to your blog, it mostly shows the horizontal banner of 468×60 or 728×90 but I really wanted to show this responsive ad unit in rectangular form so that it can cover the full width as well as full height of a standard rectangle ad unit.

For this, just create a responsive ad unit in your Adsesne account and as usually copy and paste the code in your blog but before saving changes look for the following term in that code.

Now, you just need to replace “auto” with “rectangle” as shown in the following line.

That’s it, now save changes and you will see that your Ad unit is now looking better than ever before by covering the waste space also and even it will fit to every size of screens because it is a responsive ad unit.

The above methods are the best of my self experiences, of course a few of them I learnt from the web and applied on my blog and after testing that they’re working perfectly I shared with you. So, still if you’re feeling any trouble in applying any of the step or any question regarding the whole article, you can feel free ask me via comments. I will be grateful to help you guys.