As a few days ago I published an article about “why I moved out from HostGator” and told the reason behind it, so today I’m going to provide my 10 days hosting experience with Bluehost as I’ve shifted from Hostgator to Bluehost India.

However, I will always be agree with the statement that HostGator is one of the top hosting companies of India as well as of the world, but still due to a very complicated reason I had to shift my website allusefulinfo.com to Bluehost India. Bluehost is the great alternative to HostGator and that’s why shifted there. As there is only almost 10 days passed after shifted on Bluehost, so I could’t judge its service completely in just 10 days but still this article is the pure reflection of my 10 days hosting experience with Bluehost India. 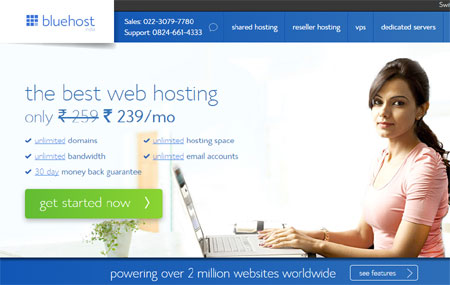 I was in such a situation when I didn’t have time to think more about where to shift site and without thinking more I moved to Bluehost and after migrating my website to Bluehost, I’m happy and till now I didn’t found any issue with the server.

But, the first day when I migrated my blog on Bluehost, felt really dissatisfied with their support options and slow responding time to tickets. Bluehost India has only two options for support that are – Phone Support (I always consider) and tickets (or we can say email support).

So, the first day I got very upset with Bluehost service because they took lots of time in sending me root password and burnt my lots of phone balance in talking with their technical support representatives for hours as their phone support is not toll-free. So, at that time I really missed the awesome support of HostGator.

See: Why I Moved out of Top Hosting Company “HostGator”

But, yes after a couple of hrs they sent me the root password and then told the reason for why they took such long time for such an easy task and after that incident I never needed to contact their support because till now no issue occurred.

As first impression is the last impression, I’m really worried about their future support and can’t predict that it will be good in future or just like as I found at first time. But, as the problem I was facing with HostGator India get fixed by transferring on Bluehost and site is now running smoothly, so I planned to stay tuned with Bluehost.