Chhota Bheem is an Indian animated comedy-adventure series. Its first show was premiered in 2008 on Pogo TV. It is one of the most favorite cartoon show of kids. It focuses on adventures of a boy named Bheem & his friends in fictional city-state of Dholakpur.

It has also nominated for Indian Telly Award for Best Kids Programme. I’m sure that it would be the favorite cartoon programme of your kids. So, on seeing such a craze of Chhota Bheem programme, many Android apps developers created numerous outstanding games on Chhota Bheem genre for kids. I’ve collected 10 best and very interesting Chhota Bheem genre games that your kids will like to play on Android smartphones.

Here’s the list of very interesting Chhota Bheem Android games for your kids that can be installed from Google Play in your device. It is the Endless Runner with great graphics and fun animations. The Goal of Bheem is to cover as much distance as possible. Collect Laddoos and Cool Powerups to increase health and energy to keep going on. There may be various bad guys in the forest so keep going on by avoiding all of them. This is not an endless game, in fact you’re on a mission. In this game, Chhota Bheem and his friends Raju, Chhutki, Jagu and Dholu Bholu have a very important mission. They have to travel through the 6 different worlds and help the citizens to solve their problems. It’s also a most entertaining Chhota Bheem Android game for those who love Chhota Bheem character. In this game, you need to jump over obstacles to overtake your favorite Bheem characters and win the race. You can use numerous weapons that you can collect on the way to victory and use them against your opponents.

It’s an interesting Chhota Bheem game in which you’ll find 50 levels of glorious victories against Dholakpur enemies. Your mission is to hold your ground against the ruthless enemies in war via powerful powers & robust towers! Play as Bheem to defend your Village against hordes of Dholkapur enemies. This is an awesome arrow shooting game for Android lovers and for all the kids who love Chhota Bheem because he’s the hero of this game. You’ve amazing chance to take the role of Chhota Bheem to destroy the leyaks. In this game, Chhota Bheem uses Prof Dhoomketus latest invention the Time Travelling Watch and arrives in Mumbai. As he is enjoying the sights of Mumbai, his time and space travelling watch is stolen. Chhota Bheem needs help in Mumbai. Run as fast as you can and help Chhota Bheem retrieve his watch. This is the best educational apps for kids who love Chhota Bheem. In this Android game, various characters, images and poses from the Chhota Bheem TV show have been used here to teach Alphabets. 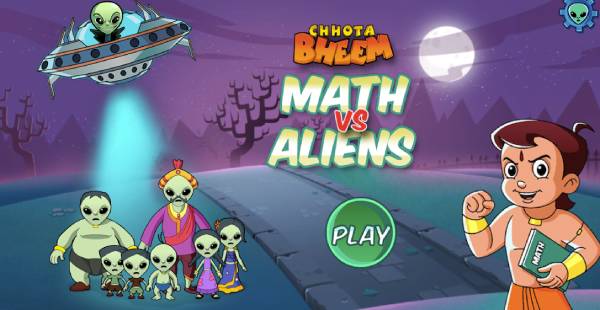 This is the best Android app to improve the skills of your kids against math. The scene is that Dholakpur is under a massive alien attack! All of the villagers have been converted into Aliens. The only way to save his friends and convert them back to Humans is to use the Power of Math Magic which the aliens are vulnerable to. In this game, kids can learn Counting, Addition, Subtraction, Multiplication, Division and Comparison of Numbers. 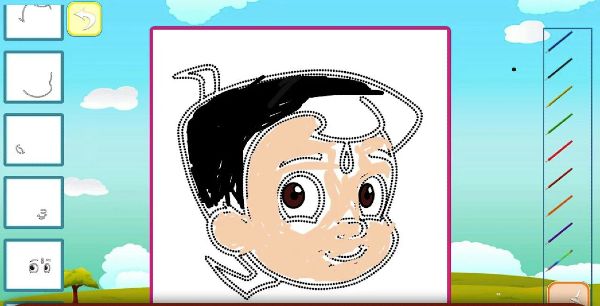 This App teaches Kids how to draw their favorite Chhota Bheem character and color the same. All the friends of Bheem: Chutki, Kalia, Raju, Indumati, Krishna, Ganesh and Aliens can be drawn using friendly outlines. Multiple colors can be used to color the various characters from the show. This app also help to improve creativity of your kids.